Rabbi Nuchem Rosenberg is currently in Israel, and he invited me to join him on a patrol in Beitar Ilit.
Rabbi Nuchem Rosenberg is a child protection activist who operates mainly in the chasidic communities of New York. Rabbi Rosenberg reached national prominence in the USA during the trial of Nechemya Weberman – who enjoyed wall-to-wall support from his Satmar community in Williamsburg, and then was convicted of multiple counts of raping a young female 'counseling' client, and sentenced to a whopping 103 years imprisonment. Rabbi Rosenberg became the go-to-guy for the press, including CNN, wanting to hear the exposed truth about Weberman, from an insider of the Satmar community.
Rabbi Rosenberg's target for the evening in Beitar was Moshe Zecharye (Chazarye) Yoel Rosenbaum. Rabbi Rosenberg has a thick file documenting the allegations against Rosenbaum, including court case reports – and claims he bolted from New York, and is now a respected rabbi/admor in Beitar. Some of the allegations involve molesting boys in a mikve.
According to Rav Rosenberg's intelligence network, Rosenbaum had been seen during Hanuka handing out free donuts to the kids in Beitar for Hanukkah.
The aim of the mission was to warn members of Rosenbaum's new community that they should be cautious of Rosenbaum, and to not blindly trust him with their children.
Rav Rosenberg printed up A4 warning notices, in yiddish, explaining the nature of the allegations against Rosenbaum from New York.
As we pulled up at Rosenbaum's shul in Beitar, Rav Rosenberg shouted "That's him! That's Rosenbaum!".
A chasidic man ran into the shul and a member of Rav Rosenberg's group jumped out of the car and gave chase.  They filmed the events (see video below), and followed Rosenbaum home.
Meantime, other members of the group distributed the warning notices to people in the shul.
A group of chasidic men and boys gathered around Rav Rosenberg's group and there were extensive discussions, shouting matches and, eventually, some boys set fire to some of the flyers.
At a certain point, Rav Rosenberg said "let's get out of here" and his team got back in the vehicle and headed home.
According to Rav Rosenberg's contacts in Beitar, the story did not finish there.
The visit apparently generated considerable activity and discussions at the shul in Beitar, and Rosenbaum apparently went back to the shul later, where he berated the congregants that they had not been "supportive enough" and that Rosenbaum had decided to therefore leave Beitar. He ordered a taxi, packed some stuff, and headed out of town.
I have to admit that Rav Rosenberg's child protection mission was not my style or taste. On the other hand, he is law abiding, cooperates with the authorities, is personally very courageous, and he does seem to be more effective in promoting child protection in the chasidish communities, in the USA and here in Israel, than anyone else out there. —-
UPDATE: I understand that Rav Rosenberg and his team went today to visit a chasidishe talmud torah, Chochmas Shlomo, in Meah Shearim, Jerusalem.
Their target was one R.Yoel Weber, previously of Monsey, NY. Weber is alleged to have molested boys at a talmud torah in Monsey – and then upped and moved to Beit Shemesh. He is now the headmaster/minahel at Chochmos Shlomo.
Rav Rosenberg and team unsuccessfully attempted to interview Weber, and they handed out flyers about the allegations, calling on parents to be vigilant.
Particularly worrying, is they found the door to Weber's office locked, with an observation camera outside it, and windows papered over.
For a guy who has been accused of molesting pupils, it's the opposite of transparency.
——–
RABBI NUCHEM ROSENBERG SPEAKING: This Motsei Shabbat, 7th December, 8:15pm, at Carlebach Shul, 70 Nahal Dolev, Ramat Beit Shemesh.

The views expressed on this blog are those of the author/s, and do not necessarily represent those of any other individuals or organizations. 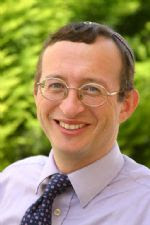 David Morris
Bet Shemesh, Israel
Nominated for the President of Israel's Prize 2010. Entrepreneur in the fields of charity and electro-optics. Established Lema'an Achai ("For My Brothers") the innovative community social services charity in Ramat Bet Shemesh, "Magen", the Bet Shemesh Child Protection Agency, and "Yad LeYedid" (A Hand to a Friend) charity helping impoverished families in Jerusalem. My day-job as Owner/CEO of  Scitronix Ltd is marketing sophisticated  electro-optical products to high tech industries in Israel. I am the proud dad to six amazing kids, and luckiest-husband-in-the-world to Julie. To contact Tzedek-Tzedek: [email protected]